I think that Helene Vannier, later Hangarter, was in the wedding party.  Mom may have asked her originally, or she may have been the stand-in for Mom's best friend (and Helene's sister), Jean Vannier who had joined the convent just about the time Mom and Dad became engaged - 1937, I think.  Mom told me that she was crushed when Jean told her she was going to become a nun.  Margo was the Maid of Honor.  John Jerome Murphy, Best Man, was Dad's half-brother, but I believe that they were more like "blood brothers."  I know that Dad looked up to him and was very fond of him.  Jean Bondardi, later Jablenick, was Eleanor's first cousin - Jean was the daughter of Lillian Soldati Gregoire's sister Matilda Soldati Bonardi.  Andrew and Eleanor were married at St. Mary's Church on White Plains Ave., in the Bronx.  Eleanor's mother Lillian made the beautiful satin gown with the spreading train.
And thus began another branch on the family tree.
at May 03, 2021 No comments:

.In 1939, Eleanor applied for a marriage license along with her future husband, Andrew J. Tobin.

Eleanor graduated from Theodore Roosevelt High School in the Bronx in 1936.  A page from the school yearbook showing Eleanor's picture happens to have her wishes to a schoolmate by her picture:  "Loads of Luck/Eleanor Gregoire."

Mom told me that she had the opportunity to attend Hunter College tuition-free, but that her sights were set on marrying and having a large family, so she happily said "no" to college.
Margo would have graduated around the same time, if not the same year, but I haven't found anything for her in school yearbooks.  It's possible that her yearbook hasn't been loaded onto the internet yet.
The Social Security program was started in the latter part of 1936.  Octave applied for it in June of the following year it seems, looking at his application.  Or, June might be when his payments began.
at April 19, 2021 No comments:

Octave and Charlotte finally got the memo, so the 1930 U.S. Census only shows himself, Charlotte and "Margarite" living on 44th Drive in Queens, which is the same house they've been living in since the 1920 census, but the street name was changed.  Queens renumbered or renamed all of the streets over several years, starting in 1915.  (For an interesting article about that project see the blog "Forgotten New York" at http://forgotten-ny.com/2013/06/every-street-is-named-60-maspeth/

Maurice and Lillian with their two children Eleanor and Maurice J. are living at 2720 Barnes Ave. in the Bronx.  Also living with them is 15-year-old Ludlow Schamberger, noted as a boarder.  Teddy and Matilda (Urbinelli) Soldati live here also with their three oldest children Helen, Lorraine and Mercedes, and Lillian's father Victor Soldati is here too.
In the tax photo of 2720 Barnes Ave. in the Bronx which was taken in 1939 or 1940, there is a woman standing to the left of the front door.  I wonder who she is.
For the longest time, I thought that this woman was holding a white bag.  They didn't have white plastic trash bags then but I thought maybe it was a laundry bag.  My dear friend Maureen looked at the picture and pointed out that it is not a bag at all, but part of the sign in the foreground that the photographer placed there to identify the building.
at April 16, 2021 No comments:

Maurice Joseph Gregoire was born in the Bronx on May 18, 1921.  His middle name may be a Confirmation name.  He used it on documents later in his life.  Some day I hope to order his birth certificate, which would show the name he was given at birth.

On the New York State Census for 1925, Maurice and Nellie were enumerated two times - again.  They are shown living with Octave, but in fact, Maurice was living on Barnes Avenue in the Bronx, and Nellie was in Rockaway, Queens on Beach 47th Street.

It took me a while to track down Maurice and Lillian enumerated correctly on this census, but finally by searching for Lillian with I-don't-remember-what information, I found them.  No wonder it wasn't easy - you can see that the last name is recorded as "Gragoria." But here they are at 2720 Barnes Ave. in the Bronx, living with Lillian's father Victor Soldati, her brother Teddy and his wife Matilda (Urbinelli), Teddy and Matilda's daughter Helen, and the two Gregoire children Eleanor and "Joseph" (Maurice Joseph).  There are cross-outs for some - I think it was confusing for the enumerator just how all were related.  In fact, it could be that the Matilda listed is Victor's daughter, but  I believe that Matilda was already married and living with her husband elsewhere.  I need to get some documentation on that.
Nellie and Rudolph are living on Beach 47th Street in Rockaway,  Queens.
Sadly, Nellie died when she was 32 years old, on Jan.24, 1929.  The abstract from her death  certificate shows that she died of lobar pneumonia, at an address on 94th Street in Queens.  I am guessing the address is for a hospital, but when I see the original certificate, I'll know for sure.  Nellie was buried in St. John Cemetery, Middle Village, Queens.

This week's photo prompt on Sepia Saturday shows a "Works Outing to Blackpool, 1955" and features people sitting at table, probably in a restaurant.  My photo features women at a restaurant table, also on an outing, to celebrate a more social kind of work:  their "Secret Pals Club."  My oldest brother, Mike, told me that he remembers the club, and that at the end of the year, they went out to dinner, and revealed their identities to one another.

He can't remember what activities constituted their secret "work" but perhaps they left cards and gifts for one another on doorsteps.  My mom was working as a housewife and mother, and I think that the other women were also.  Finding a surprise on your doorstep, or perhaps a card in the mail must have been a fun pick-me-up when the routine was starting to wear on you.

The photo is glued into a souvenir brochure, the cover of which features a drawing of "Mike's Yacht Bar," which looks like a lot of fun, especially after you've had a few!

Signed in pencil by Patsy Kelly, an actress of the era: "Luck and Happiness/Patsy Kelly".  Perhaps the ladies saw her dining at this restaurant while they were there, and got her autograph. 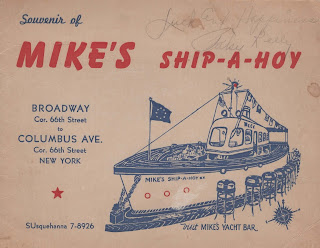 On the 1920 U.S. Census, Maurice and his sister Nellie were enumerated two times, at two different addresses.

They appear living with Octave on Nott Avenue in Queens, when in fact Maurice was living on Burke Avenue with his wife Lillian and daughter Eleanor, and Nellie was living at 40 Gramercy Park in Manhattan.

Here is the 1920 U.S. Census showing Maurice, Lillian and Eleanor at 654 Burke Ave. in the Bronx.  The last name was written incorrectly by the enumerator:  "Gregrre."  Just above Maurice, you can see that the Soldati's were living there also, although Victor's last name was recorded as "Gregrre" also.
There must have been a misunderstanding on someone's part.  Octave or Charlotte didn't understand the question, or the enumerator didn't understand the answer.
Nellie married this year, to Rudolph  Vincent Hirten.  The marriage license was granted on May 27 in New York City.  The information on it shows that Nellie's full name is Helen Marie, and that she was born in "Roux Hubes" Belgium.  I don't know what "Hubes" signifies, and research on-line hasn't revealed anything.
Helen and Rudolph were married on June 23, 1920 in St. Ann's Church, which is shown on the marriage certificate.